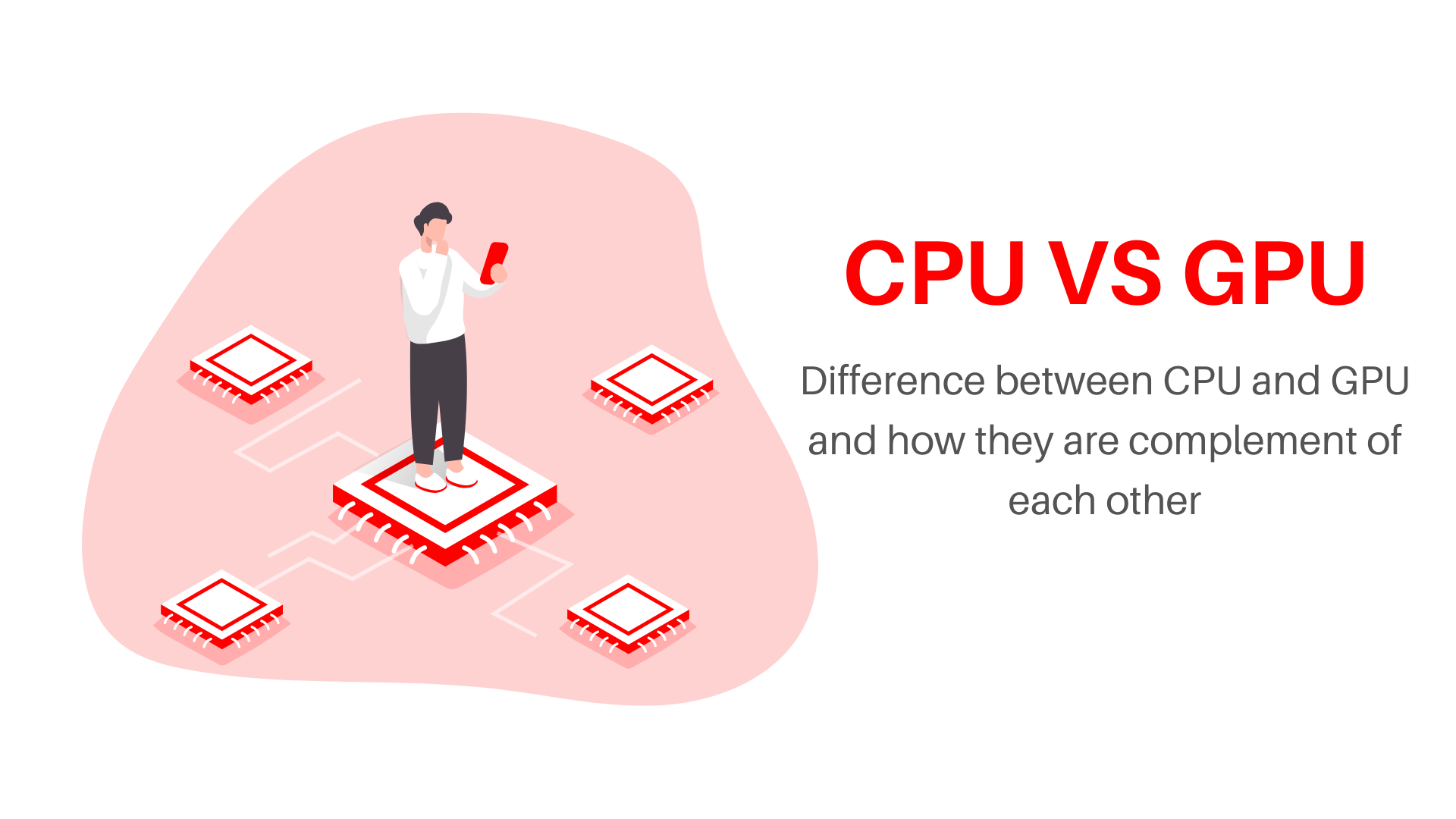 If you are a non-techy guy, you probably don’t know about GPU and CPU or maybe you are struggling to understand the difference between them. You may have lots of questions in your mind about GPU and CPU [Like what is the difference between CPU and GPU, which is best, is GPU and CPU are same, can GPU replace CPU, is GPU increases the performance…..]. Whatever is the case, I will try to answer all your doubts here. Stay tuned!!
Also, read- What is TPU and How it is different from CPU and GPU

What are CPU and GPU?

CPU (Known as 🧠 of Computers)

The central processing unit (CPU) is a general-purpose processor also called main processor, microprocessor, or just processor. Any task which runs in your device like arithmetical, logical, controlling, and I/O (input/output) are taken care of by the CPU for example when you surf the browser, watch movies, use your excel/word sheet, etc. CPU is designed for serial processing which means it does one task at a time very efficiently, also the CPU does very complex tasks so it requires lots of memory(RAM). Talking about its material CPU is a silicon chip made out of many tiny transistors

If you want a detailed blog dedicated to CPU, then pls comment down 😃

GPU (Known as 👀 of Computers)

GPU stands for graphic processing unit, as its name suggests GPU does all tasks related to intense graphics or graphics like it works when you play the game, do animations, edit your videos, etc. GPUs are specialized processor which are designed to handling any visual related instruction, which was done by CPU earlier but because it reduces its performance so GPU was introduced to reduce CPU’s burden. In comparison to CPU, GPU has thousands of cores in it and is a lot faster than CPU. GPU works in a parallel processing fashion, it split its tasks into thousands of small tasks and work parallelly because graphics-related tasks are not dependent on each other.

Because of GPU’s parallel computation working fashion, it is also used in machine learning, deep learning, bitcoin mining, and many other scientific calculations and research-related task because it split a big task into thousands or millions of small tasks and work on them at once. This makes it faster than a CPU.

Difference between CPU and GPU

Now as we know about CPU and GPU you might be clear about the difference between them, but if you are not, then don’t worry I will discuss that here

I would like to create an analogy to help you understand this, think of a military knife which is a general-purpose cutting weapon and can cut many things, from paper to wood but can it be used for the surgical purpose can it cut human skin, maybe it can but it will make a tattoo on it which we don’t want. So, for that purpose, we have a special knife (scalpel) which is specialized for only surgical purposes and can do it very well compared to a normal knife right. But again will you use a surgical knife for cutting your veggies, no right because it will not be as efficient as a normal knife. Similarly, we have a CPU for general instruction and a GPU for graphical instruction let’s understand their work by a simple example.

Suppose you are playing a game, let’s say PUBG and in there you fired some bullets on an enemy, now the rendering of blood effect, the motion of your enemy, and your gun are all processed by your GPU, and suppose he fired two bullets on you with ‘UMP45’  and you fired 1 bullet with ‘AWM’ then who will knock out, it’s a logical task right so it will be decided by your CPU.

This a Simple demonstration of CPU and GPU by Nvidia

Now let’s also see some of the technical differences between CPU and GPU, incase you want to understand it more deeply.

GPU- if you are trying to compare GPU and CPU then let me tell you GPU is not faster than a CPU it’s faster only in parallel computation because it has more than 1000’s of cores in it as compared to CPU which only have 18 or more cores, (it could be different in today’s date). But yeah in parallel computation it will be more than 100x faster than a CPU. For task-related to deep learning and machine learning, it may not satisfy you sometimes but usually, its speed is 4-5 times faster than CPU. You can read this here.

CPU- The speed of the CPU depends on the numbers of cores it has, for example when the CPU was first developed by Intel in 1971, it has a single core of 4-bit processor called ‘Intel 4004’ which was capable of 0.092 MIPS (millions of instruction per second) only and was designed for calculators, cash register, atm and other small businesses for performing arithmetic and some other small operations.

But now our current CPU which is a multicore 64bit processor is capable of 3.8GHz (3.8 thousand million instructions per second) at a base speed that is more than 40K faster than our 1st version of CPU.

Both have their own specialty and can’t replace each other. They complement each other but can‘t replace each other, at least not yet. But yeah some companies are trying to build GPU that can kind-of replace CPU, if I am not wrong it’s called GPGPU stands for General-purpose GPU.

Does GPU boost your system speed?

Are GPU and Graphics Card same?

One last thing I want to cover which many people ask about, is GPU and Graphic card are the same things? They are not GPU is actually a chip that is installed in the circuit board and that circuit board is called a graphic card, so basically you can understand this as thinking of GPU as a CPU and Graphics card as Motherboard.

Note: If you find any mistake, your correction will be welcomed and highly appreciated